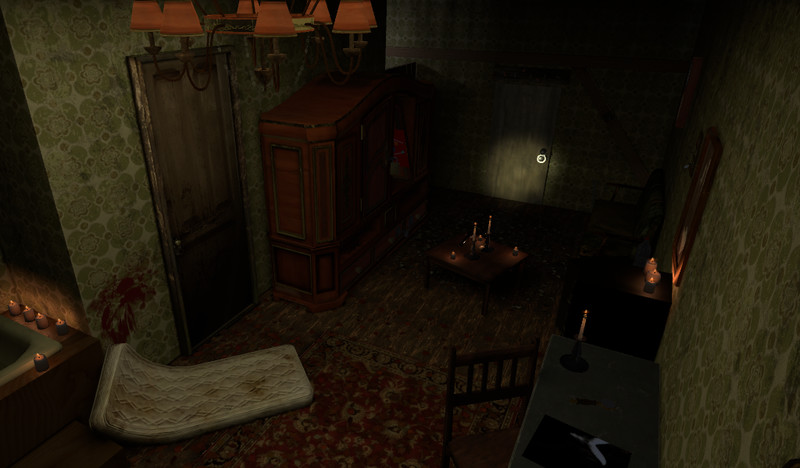 Will you escape in time?

A-Escape is an escape room game built from the ground up for VR. Working in collaboration with a real-world escape room business, A-Escape brings the complex puzzles and immersive environments of escape rooms to your living room. 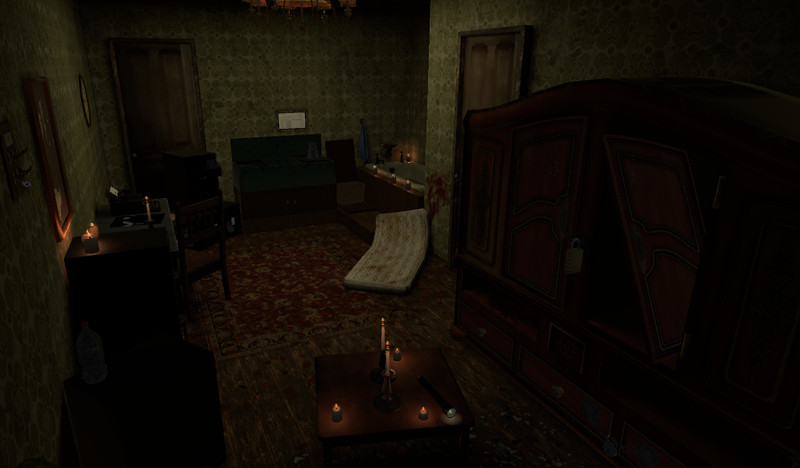 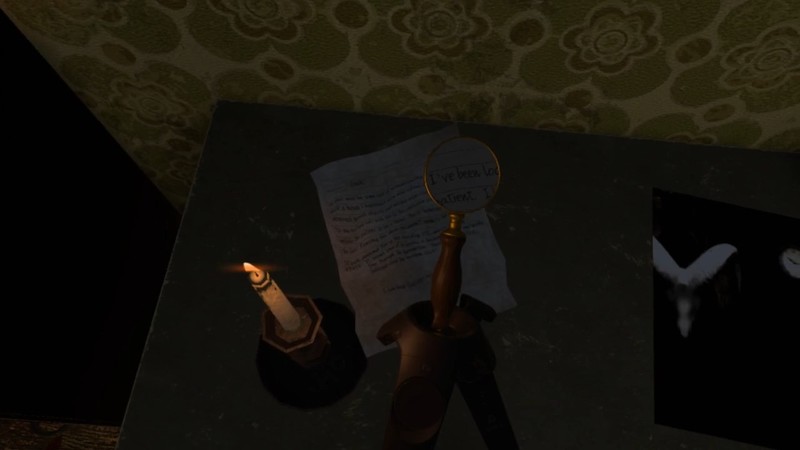 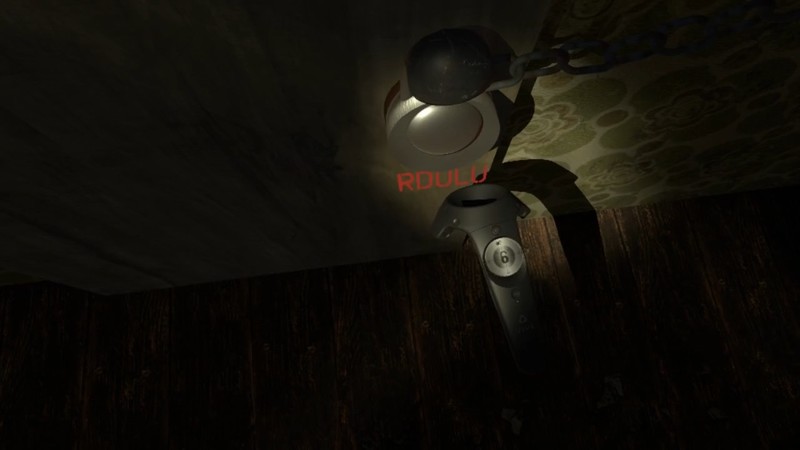 
As an escape room enthisiast, this is exactly the kind of VR escape room experience that I have been looking for. This game uses three different locks (4 digit dial, traditional combination, and directional) as well as an assortment of keys, which makes the gameplay of searching, cluing, and solving extremely recognizable and satisfying. The whole experience could very well be a physical escape room itself. I found the implementation of the three locks to be straightforward and fun.

The game looked and played very much like you would expect an escape room to play. That said, it fell into some pitfalls common in escape rooms. First, there is some outside knowledge needed in order to solve one of the puzzles. This knowledge is not provided anywhere in the game. This would normally be where a player would ask the game master for a clue, but there is no hint system built within the game. Thus, if you are stuck due to poor cluing or not having the required outside knowledge, then you are indeed truly out of luck and will be required to look for outside sources.

Second, the game does provide some help with the directional locks, allowing you to bring up the in game menu to input the code combination for the lock that you find, so you don't forget it. This feature is never indicated within the game, however. The real-life analog to this problem is a lack of ability to take individual notes on clues and puzzles part-way solved.

Third, I dislike knowing that I have a code for a lock and then I waste time hunting for "the right" lock. Near the beginning of the game there were two available options for a combination lock code that I found, only to discover that the code was needed for another combination lock revealed later. This wasn't a problem with all of the locks, but it did force me to waste valuable time early in the game, especially because the dials for the in-game combination locks turn so slowly. Plus, if you input a number incorrectly, which is easy to do, you end up using more time and growing more frustrated.

Fourth, there was an endgame puzzle requiring the placement of an item correctly which was obvious, but required precise placement in a way that I felt could have been more obvious.

That said, the puzzles were ingenious and fun, and I appreciate being rewarded for searching all around the room. This is definitely one of my top VR escape game experiences! I can't wait for Chapter 2!

(Also, as a small hint for playing the "Prologue" game, which has similar puzzles, go ahead and avoid your inner escape room instinct and break away.). A fairly difficult escape room (for me, a newbie). The variety in puzzles types was great and the overall length was about right. I enjoyed it enough it gets a recommendation from me. I played on the Oculus Rift in Oculus mode (though it still runs SteamVR??)

The rest of this is complaints, though. I hope to see more from this dev (Chapter 2??) and I'd like to see improvements.

- The story is impossible to follow. I don't mean it's convoluted or weird, I mean it's literally incredibly difficult to read any of the flavor text. The magnifying glass is too fickle to use in combination with the flashlight too. (Which makes the ending a little... uh... well, unsatisfying.)

- Even with a decent amount of supersampling, most of the textures didn't look sharp. And there's not enough light or color in the room to make shapes or objects easy to see \/ read from a distance. (The flashlight helps up close at least.)

- The controls are pretty bad. I would have liked to use the stick to utilize smooth movement.
Picking up objects feel odd sometimes, like their collision is too large.
Sometimes they get swung around or dropped when teleporting or snap turning.
Snap turning is broken half the time if you're holding an item. (It just doesn't work at all on either controller until you drop your items.)
The Touch controllers normally use Grip for picking up, not the Trigger. This may also free up the trigger for "select" instead of clicking the stick in.

- My god the lock controls are infuriating sometimes. Especially the combo lock. But especially the other combo lock. But ESPECIALLY-- oh, no, actually the directional lock was fine.
Spinning combo lock: tilting the controller to pick a number on a tiny little dial then pushing in the stick to HOPE you've got the right number. This was a nightmare.
4-digit combo lock: Did you test this with Touch controllers? It's not like the Vive's touchpad... This was also a nightmare to use, but less so than the spinning one because you don't have to lock your choices in.. Solid escape room game. Well worth the price and high level of difficulty. Hopefully get more rooms soon from this dev.. Pretty good escape room game. Controls are solid albeit a bit difficult to get used to. Rooms looks phenominal, and the puzzles are quite challenging.. Been wanting to play this for a while and picked it up after it got Oculus support. I went in with low expectations, and by the time I finished it I was pretty happy with it. The puzzles have a lot of depth and make you feel accomplished when you figure them out. I don't see what everyone's complaining about though, the game works perfectly fine. Sure it's not the most polished game and the controls take a little getting used to but it at least tried to do something innovative and unique.. Room escape game of good length with very well made puzzles but technical problems especially in object manipulation.

Positive:
+ difficulty of puzzles is quite high, it is the best immitation of real life room escape games i've seen so far - not just finding objects or codes but really combining multiple sources of information
+ i like the different locks, interactions are fine (beside rotation locks)
+ plot and atmosphere of the game is good

Negative:
- graphics are moderate to simple, especially textures are weak
- collision of objects from time to time lead to disapearance, resetting is there but i would prefer that this would not be necessary and it introduces additional flaws
- no saving, so either make it in one run or start over again for the next try

For this price, i can fully recommend this 3 hour room escape experience with it's high quality of puzzles. It's just a pitty that there are technical porblems.. 3.7 - Positive
Best most realistic VR breakout room we have encountered so far. Would love to see a save game feature added. Transport and prop glitches are being fixed promptly and I really enjoyed the game menu that all Breakout room games should have. The best one... adjust the floor hieght from within the game.. AWESOME. and the reset options are great as well.

You will need to take notes to escape this room and pay very close attention to all details !!
Have fun and good luck on this one, you will need it !. Solid escape room game. Well worth the price and high level of difficulty. Hopefully get more rooms soon from this dev.. If you're looking for an escape room that makes you think this one is a great option. It's not perfectly polished but it's fun.. After some update I can no longer move in the game. Saw in the discussions that another person had the same issue and there has been no response to the issue. I went a head and asked if that person ever figured it out or found a solution. They have not and apparently the people in charge of this game have abandoned it. At least, that's the impression that I got when there has been no response in this time frame.