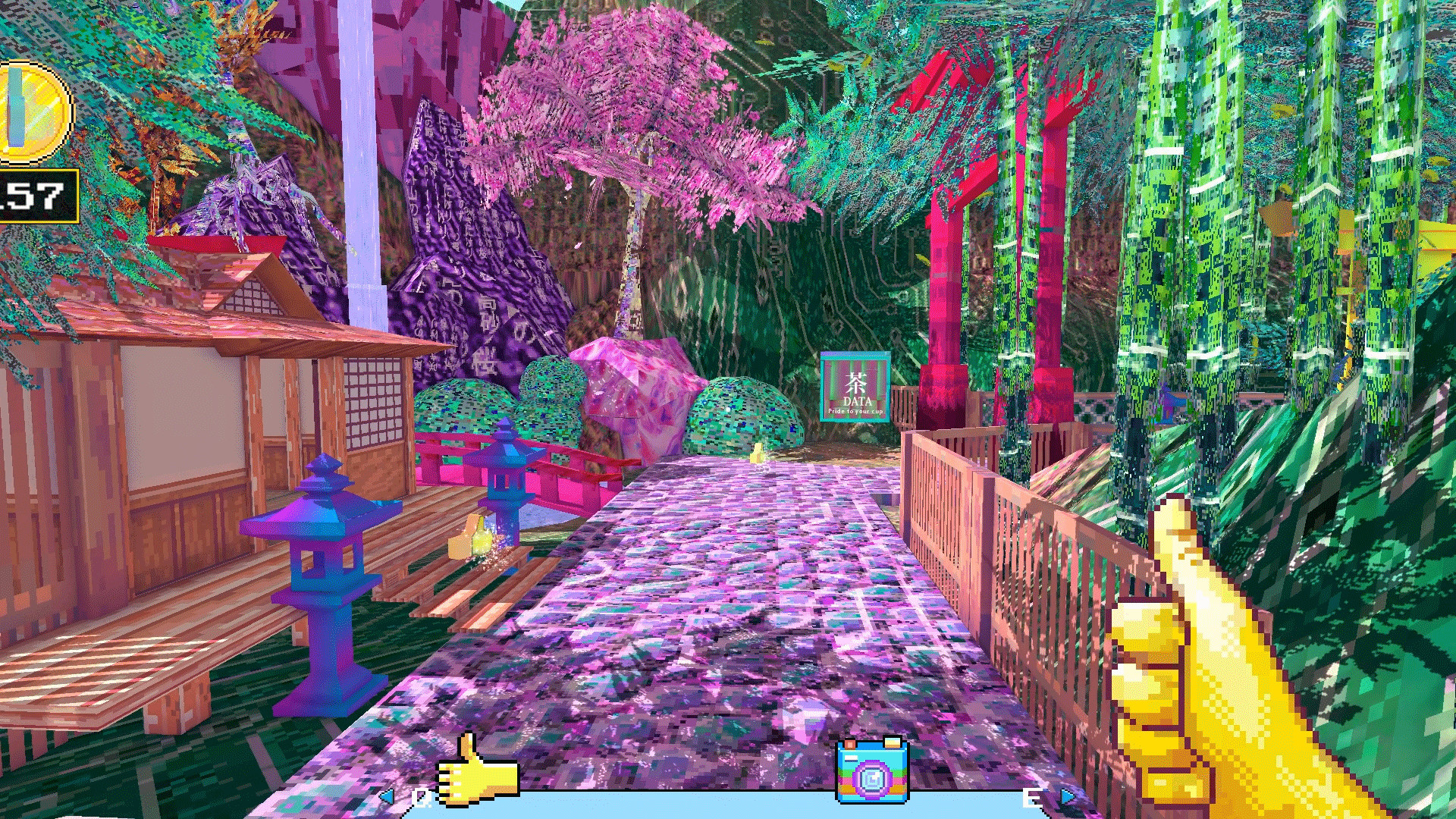 
It is the future, and supercorp NATEM is now responsible for offering most digital services. Your computer and the internet are all within NATEM's control.

Leave all your worries behind. 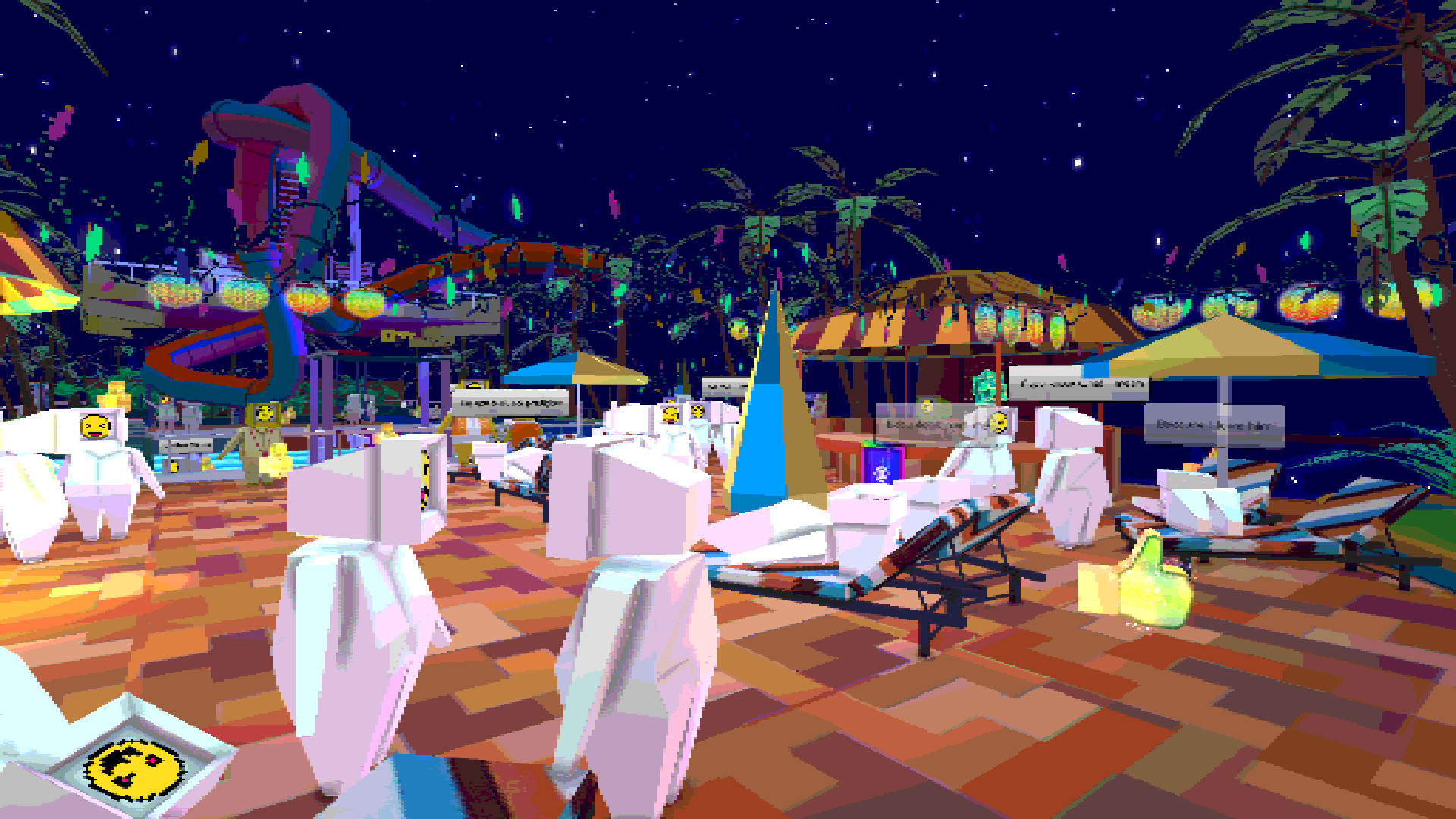 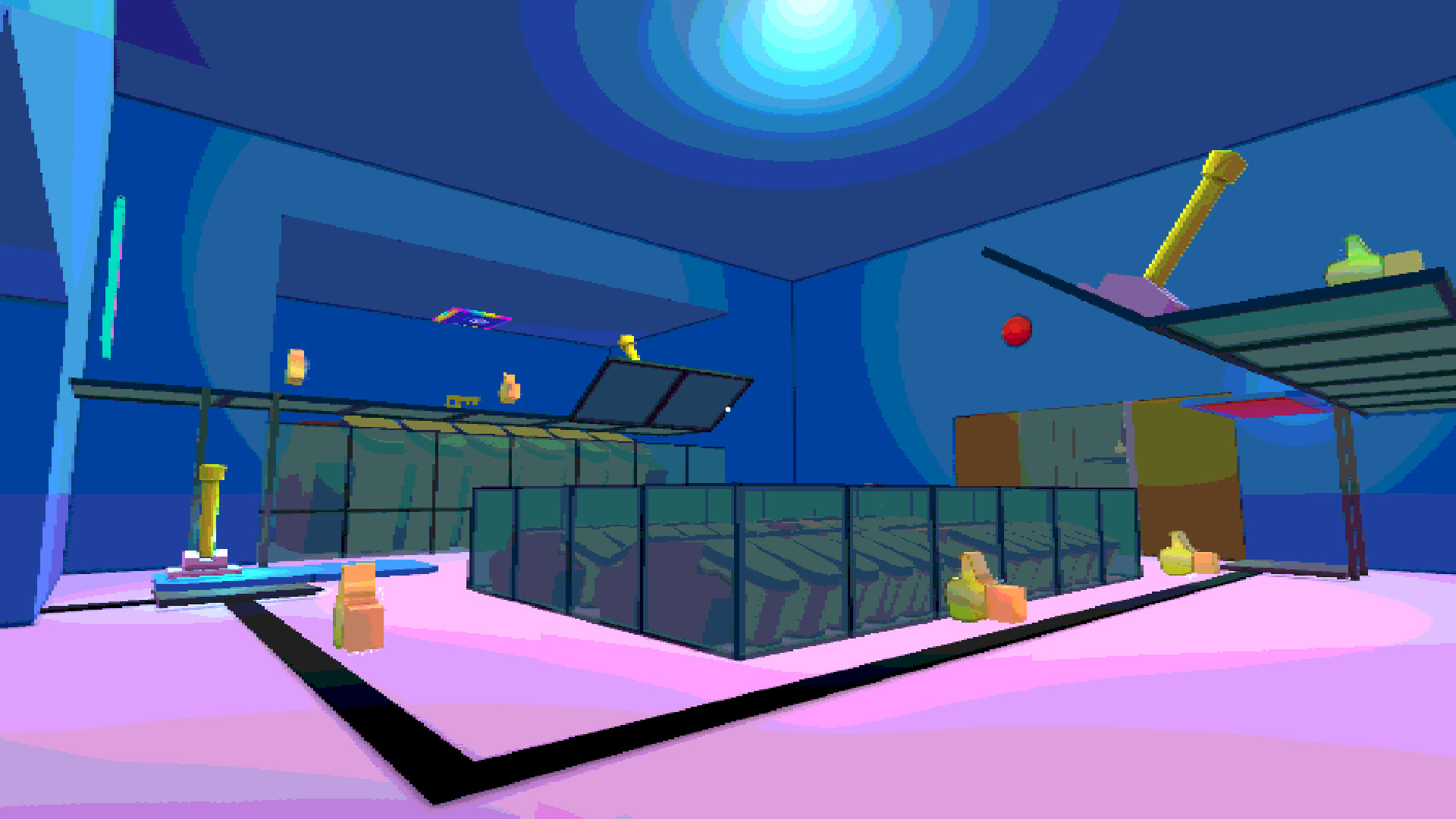 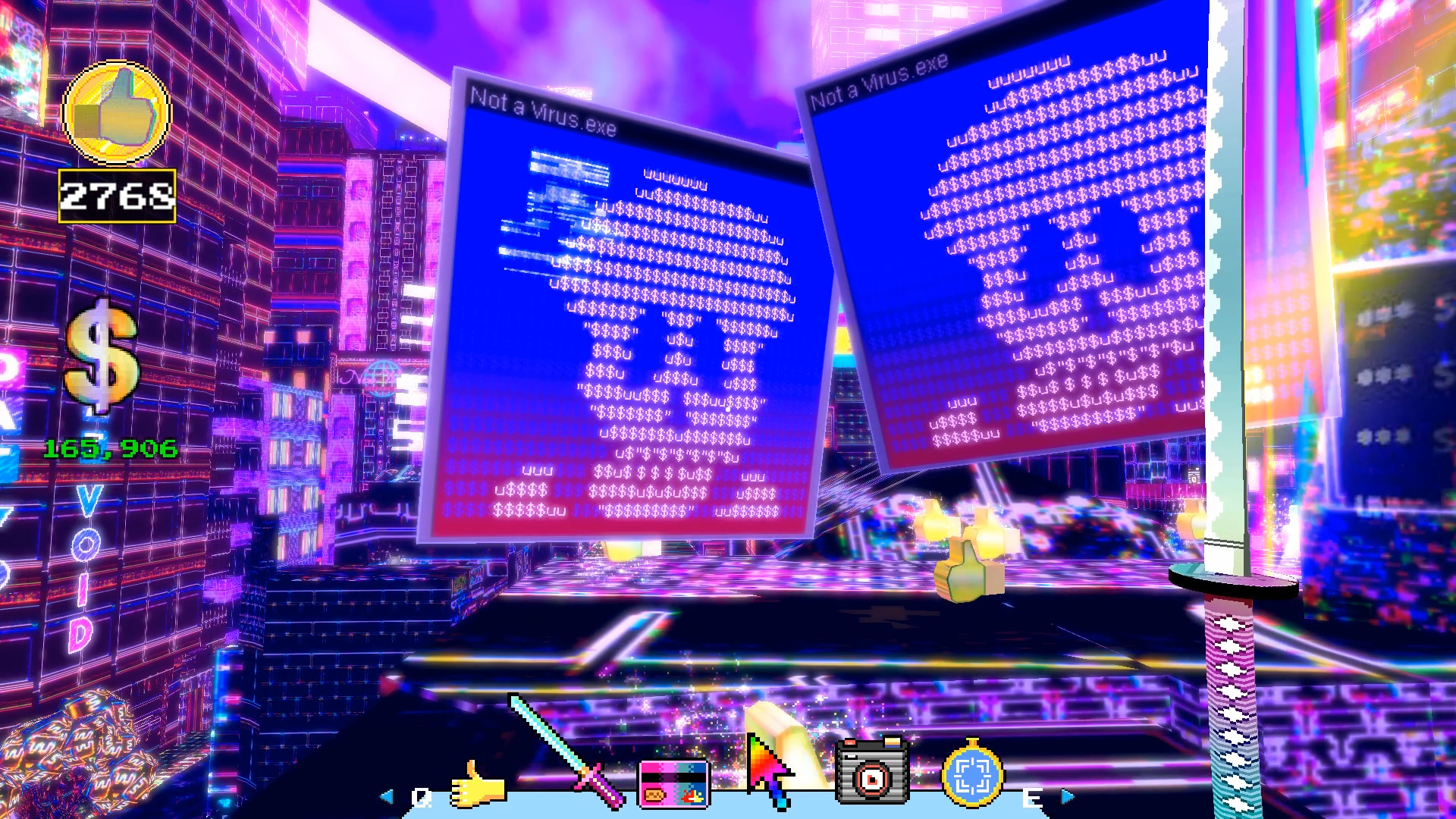 
Broken Reality... what can I really say? There's no real conflict, to adversity to face, you just walk around this vaporwave facebook-like world and try and get likes as if they're your score, which they are. Take pictures with as many photo stamps in them as possible, combo shopping (It makes sense in-context.) and mashing your thumb at stuff, you know just like real life. Oh you also get a katana to cut pop-up ads and viruses. However it's actually a pretty chill game and if you like aesthetics you'll love this game, especially if you like to explore and solve puzzles. I'm sure I missed a bunch on my first playthrough as I only got about 4600 out of the 5000 for the maximum rank. (3900 is required to beat the game.) However late into the game things start to feel a bit off. Near the end you're forced to do some Metriod Prime/Chozo Artifact style hunting for keys in the various worlds. As for the last area well, I don't wanna spoil it. It also actually feels like the game's creator(s) tried to put some lore into the game. This is seen during some cutscenes and in one hidden area of the game. (You're forced to go there in the late game.)

My only real critisism about the game is its ending. I won't say what it is but it was lackluster and the choices you make don't have any influence on the ending you get. It felt like a bad end more than anything else and I feel like it detracts from the lore and world they tried to build. Aside from that it's worth playing if you have $15 laying around or want something different to try. Good for relaxing and taking it easy. Just don't expect any grand conclusion to your adventure. Pick it up and start again, shooting for a higher score.

I'd give this around a 7.5-8/10.. The visuals are mindblowing, the soundtrack is a joy to listen to as you navigate your way through this digital world and the quests are pretty enjoyable as they have varying levels of difficulty: some of them are extremely straight-forward and others really put you mind at work.
I personally am fond of the not-so-straightforward quests, mainly reminds me of those old games where you had to figure your way through rather than expecting the game to give you a direct answer. It's challenging, but very rewarding in the end.

I absolutely loved the millions of references scattered throughout the game, the products, ads, stores, etc. are all extremely well-thought, creative and very amusing to stumble upon.

What more can I say? I've been looking forward to this game ever since I stumbled upon the v.2 trailer back in 2015 and It brings me so much joy to see this great project finally be out there for all of us to play.
Certainly hoping there'll be unlockable achievements in the future!
. Incredible game. You won't regret buying it. This game is amazing. If you are a fan of vaporwave and its aesthetics, you will enjoy this game. Although you will most likely get through it pretty quickly, I feel as though the ~8 hours the game will take is worth it.. This is a tough review to write. First out of the gate, I really enjoyed this game. I'm giving it a positive review with a huge caveat (noted at the end of this). I backed the Kickstarters, and I was really looking forward to this. It turned out really well! If you are an older millennial or you have a soft spot for circa 2000 games, then this will poke a lot of aesthetic feels for you.

No spoilers here, just some commentary.

The good: Everything through the end of Geocity was a blast. I love the tools. I love the story. I love the music. It felt like a smathering of AAA games from 2000. Captures some early Suda 51 feels. I aesthetically enjoyed the ending.

The bad: While this section is longer, that's not to undersell the merits, the bits I was less jazzed about require more explanation. The cruise ship felt like Jazzpunk and a Brandonsoft game offspring and felt like it fit less well than the others - that's not really bad? Just my take. More critically, the ending series of levels was a dark turn and frankly unwelcome? The end becomes massacore-light and it wasn't what expected or wanted from this game. I can see people quitting before the end, because the game gets much harder than the opening of the game intimates - and that kind of sucks? It's weird to make an exploration puzzler game into an extremely punishing mouse agility test to see a conclusion that you will want to see. I wish they had made an accessible ending for everyone and then had an alternative ending(s) for those that really wanted to git gud. Additionally there are some rather severe visual glitches and bugs that make you need to restart the application. Very rare, but they happen. No deal breakers. Finally, while I enjoyed the aesthetics of the ending, the message is muddled or didn't resonate with me? It's not subtle, it just doesn't feel like it's speaking to anyone in particular? I say this because it seems like it wants you to respond. I could have seen it going to a bunch of other different, more interesting places. It doesn't feel like people writing what they know, and instead seems to address a trope that is well trodden?

That said, I finished it, and I'm glad I did, but I provide a word of caution to anyone who plays the demo and expects a laid back chillwave game. That is not where this goes.. This is weird, but it has an amazing soundtrack.
I have played the first map like three or four times already because of the demo and playing with friends. Totally a new experience.
Give me this in VR and I'm sold.. I would buy a VR headset instantly if this was compatible. I expected an a e s t h e t i c vaporwave walking simulator with lots of weird stuff just laying around, but it turns out the items actually make sense, it has lots of little jokes everywhere, and the gameplay with small quests is fun. Anyway, walking around just looking at all the colorful details can also keep you busy for a while.
What bugs me a bit is that it only works with keyboard and mouse. This is the kind of game I want to play in a state where I can't get up from the couch, so I wish I could use a gamepad.
Other than that it's awesome and really one of a kind. Play it.. this game is ♥♥♥♥ing GREAAAAAAAAAAAAAAT
VAPORWAVE AESTHETIC! GOOD HUMOR! ERRYTING

We are thrilled to announce that we have just posted an updated version of the demo for Broken Reality. The demo is essentially the first level of the game and is a much better representation of what we want the final game experience to be.

We are working hard to put the final touches on the game including testing. After you have played the new demo we would love if you can share your thoughts but more importantly make us aware of any bugs you encountered so we can quickly address them.

The development journey for Broken Reality for the most part has been amazing, and we are super excited to be able to share the full game with you shortly in the near future.

We apologize to our fans that have been anxiously awaiting the full release, that you will have to wait an additional 45 days. But in the meantime, we hope you will enjoy the updated demo and appreciate our effort to try and make the full game an amazing experience.

*Added the ability to save your data, even within the Demo!
*Made great improvements to UI and graphical animations
*Re-hauled our character animation system
*Re-organized and improved audio engineering
*Re-wrote some dialogue

All of this to reflect the evolution of the game's quality. Improvements still coming to both the demo and the final release.

Thank you for your patience, more news very soon!
. Digital Soundtrack available NOW!:
Greetings, users!
We are happy to announce that our OST is now available on the Steam Store!

You can buy it as DLC for the game, which will download the music files on your game folder!

The OST includes all music made by featured artists, and will be updated with Broken Reality originals within a few weeks! Thanks for being patient as we "songify" our real-time soundtrack!

Here is the release track list for the OST:

After such a long journey (one that is still far from over) we are excited to announce that we've already submitted our full build of Broken Reality to Steam for review!

That, and the current state of our internal build, lead us to confidently announce that the game will be ready for sale on Steam on November 29th!

After release, we will work on providing quality Mac and Linux builds through Steam, so expect those to be delivered before the end of the year!

We want to take a little moment to thank all users who have been giving us invaluable feedback these past few weeks. Your passion, curiosity and downright thoroughness, helped us achieve the level of stability we dreamed of. Again, thank you from the bottom of our hearts! <3

-DYNAMIC MEDIA TRIAD-. Game is OUT!!!:
Wonderful users, the day is here!
Broken Reality is out NOW!!

Te celebrate, we're doing a 10% discount that will be running through December 6th!

We really hope you will enjoy this adventure, share it with friends and tell us what you think about it!

Backers: We highly reccomend deleting your older Backer Build datas because of changes done on the save database, and various fixes that we did on the game throughout the month! Having said that, it may work, it's just less risky to do so! Plus, you gotta check out what we did to all levels! :P


Hope you will all enjoy the game!
Thank you all so much for your support, feedback, bug reports and awesome vibes!

Thank you so much for being here. For being the first few to try out our game and specially for all your wonderful feedback. It really makes it all worthwhile when we read such beautiful comments and messages.

So, big news!
We launched a Kickstarter!

We're doing it for a variety of reasons, such as assuring the quality of the game by expanding our team a bit, and being able to develop for major consoles.

If you liked our demo, you can secure a copy of our full release at a discounted price, while helping Broken become the best it can.

So again, thank you so much for being here with us in these important days.
It means the world to us to have such an amazing community, and we won't let you down, neither here nor in future projects.