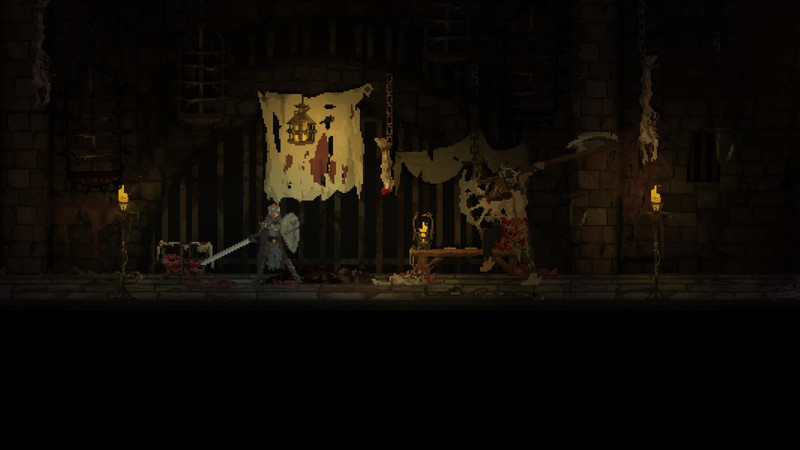 Explore the secrets of a mysterious fallen temple and put your Templar faith to the test in Dark Devotion, where no sacrifice is too great in praise of your God. Measure your devotion and your bravery by journeying into deepest darkness for answers to questions that will challenge your very existence.

Dark Devotion features a richly detailed, immersive narrative that unfolds a sombre tale of your Templar religion’s irresistible calling. Every encounter challenges your fortitude, piety, and conviction as you move deeper into your cursed pilgrimage. Spanning four unique worlds, each with their own incredibly detailed environments, you’ll wield dozens of weapons in your quest to discover the Temple’s secret: all the while assailed by dark enemies and devious bosses whose core mission is to destroy your soul and damn you forever.

Throughout Dark Devotion you’ll discover an array of weapons, armors, and relics with which to enhance your character. Each item has its own attributes and statistics, and is customizable with mystical runes. It is essential that you maximize your strengths and adapt your inventory to the enemy you’re facing. Choose wisely...

Dark Devotion is a story of perseverance, dedication, and secrets. Every chest you open, every item you encounter holds another piece of the story: be it a letter, weapon, or clue, all will help you on your quest. Whether you find these secrets amongst the shadows or in the dead hand of another character ...well, that all depends.

In the Temple, Faith is your only recourse against the heathen droves. Defeat them to collect Faith and unlock secret paths, special chests, and more. But remember to use your Faith sparingly. Nothing lasts forever.

The Temple yearns to see you dead. Your survival depends on using the right item at the right time to heal your wounds or dispel a curse. Some of these items can be looted, others are scattered throughout the Temple in secret places. Employ them wisely… your life depends on it.

The eye of your God is ever-watchful. Complete an act of bravery or skill, and your God might bless you. But the Temple is also rife with despair and sickness, ready to destroy those who lack courage and temperance. Learn quickly its ways, or suffer.

Salvation is fleeting, so choose your route wisely. Every world in Dark Devotion offers several different paths. Each one is original, but all are interconnected, and the only commonality they share is that there is no turning back.

Completing your quest requires shrewd interpretation of the secrets shrouded within the Temple. It’s easy to get lost, though this might bring you favor...depending on the secret you uncover. Perhaps the Temple will reveal a hidden altar where one’s story can be saved if one honors the Temple appropriately...or perhaps not. 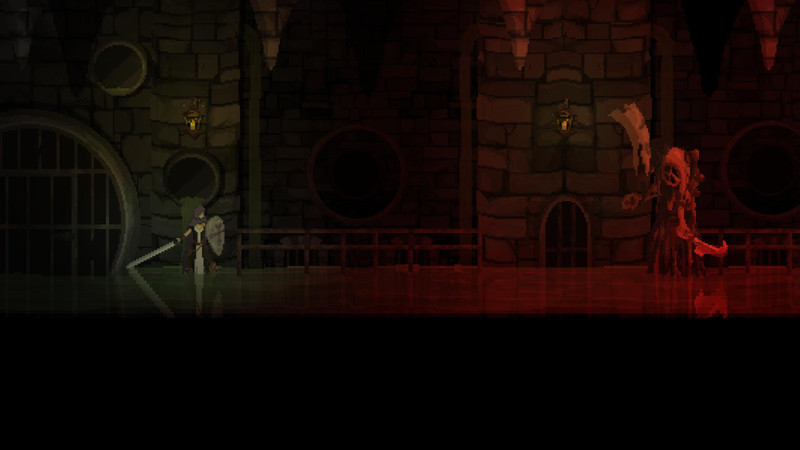 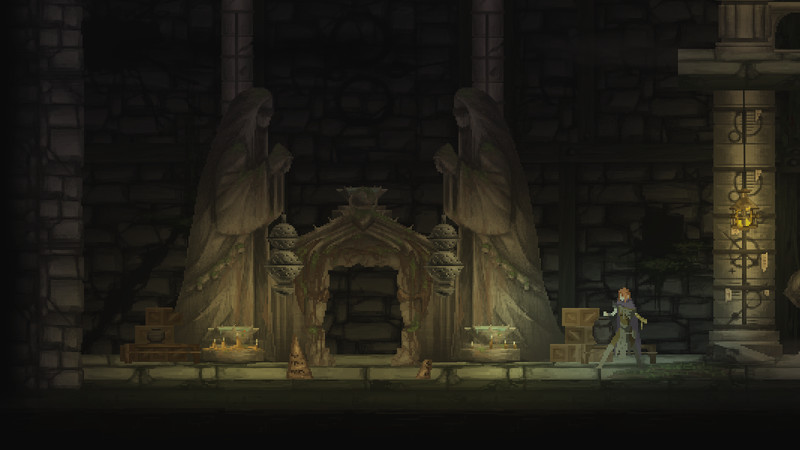 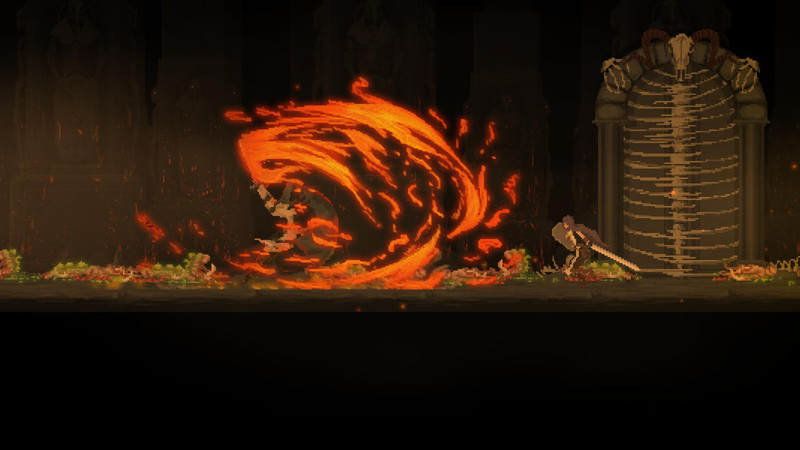 This game is very gud. Buy it if you like Salt and Sanctuary and Dead Cells. I'm surprised, I was expecting to be giving this a recommendation, but with how it is currently I really just can't.

The game plays something like a Dark Souls roguelike, with stamina management, weapon combos, general playstyle differences based on those weapons and management, and even a similar looking UI to Souls games. Along with that it has the tough-as-nails roguelike attitude with death causing a complete restart of the game and generally random events happening. However the world itself isn't random, every play through the dungeon is the same, with the same enemy spawns, rooms, and pathways, the only difference is what drops from enemies and boxes, and what buffs you seem to get.

I'm not sure if it's just because I didn't get far enough but there seems to be a lot of mechanics, important ones that might save you, that just go completely unexplained.

I'd be running through a room and suddenly I'd get a debuff. Why? I don't know, I wasn't hit, I didn't touch anything, I just suddenly get debuffed for no apparent reason.

On the opposite end, sometimes I'd suddenly get buffed. Did I touch something? Was there a hidden mechanic? I have no idea, I just suddenly seem to get them.

The ideas of the buffs and debuffs themselves seems overall extremely flawed and can make or break runs in a fairly unenjoyable manner. Some do almost nothing like [-0.5 stamina regen], it's unpleasant but extremely workable. While others are much more destructive like [-10% movement speed and stamina regen]. Others make sense but are still massively destructive to a run in what feels like an unfair manner, such as [Bleeding] which causes you to lose one HP per 30 seconds. It has a chance of being inflicted when you get hit from an attack. As far as I can tell, [Bleeding] is permanent. At least until it you (randomly) seem to get the [Immune to bleeding] buff, which stops it.

The second biggest frustration is the controls. They make no sense whatsoever and unless I'm missing something, they cannot be changed for controller.

To give an idea of how assbackwards the controls are, for Xbox controller:

Swap Weapon is - A
Dodge is - B, LB1, RB1
For some reason Pray (Activate certain things) has it's own button - Y

Smaller less important things that could be ignored for the most part if they didn't fight with the other stuff. Combos just don't seem to exist for the most part, save for some weapons. The immediate first room after the tutorial is absolutely unreasonable and you can literally die within the first few seconds, without even seeing an enemy. Once you pick up an item you can't look at it, but even if you read it beforehand the descriptions don't generally give a good idea of what some items do.

Perhaps the problem is just that I suck, I'm not sure, but the game just in general seems unfair and preys on misunderstanding and ignorance of the mechanics rather than mistakes and not paying attention.. This game is very, very good. It's hard but fair and as you progress and get better at fighting you enjoy it more and more. You improve your stats and gear through unlocks you find and "experience points" you gain, but really it is your own skill improving as you play that makes the biggest difference. The artwork, enemies and music is superb - really makes an awesome atmosphere. The lore is mysterious and epic, controls are responsive and fluent (on keyboard, I have not tried with a controller).

I'd recommend it to anyone who likes these types of games - hard but fair and little to no hand-holding.. 2D Dark souls? Not really.
The atmosphere sold the game to me. The graphics are nice, the premise is interesting and even the gameplay seem familiar at first. But the game fall short fast. As symbolized by the very first corridor of the starting dungeon where an instant death awaits unless you, one you cannot see unless you pan the camera down. This pattern repeats itself with the enemies and bosses, a problem that is aggravated by a fatal flaw ; This is a rogue like. You lose - all your equipments and items - yet you have checkpoints. This mean you can end up at the gate of the boss with no equipements at all. The solution? Start over from the start to have a chance.
Regardless of memorization of the level and enemies pattern , this flaw makes the game feel cheap in its difficulty.
This game is unfortunately a pass until the rogue elements are made optional.. Tedious: More Work than Fun

I've barely played it for an hour, but stripping me of ANY equipment and forcing me to return to the blacksmith after dying in a game where you die all the time has made it extremely monotonous before I've ever had a chance to get anywhere. Game requires too many points to upgrade anything, considering how much work it is to get any kills with the garbage equipment you have available in the early game.

The game is going for soulslike gameplay apparently, where I'm going to be repeatedly dying and gradually getting stronger as I experience the game. But it feels far more like a roguelike. Everything in the game is constantly trying to murder me and traps and enemies are all over, in ways that feel far more like Dead Cells or Spelunky than the likes of Dark Souls. But it gives me the same layout each time.

So I'm getting without giving me anything new to explore each time I venture in, making it feel more nad more boring every time I go back in to re-clear the exact same level as last time.

So I'm getting the tedius repetition of a soulslike, with the aggravating difficulty of a roguelike, without the upsides of either to offset them. Nuts to this. Getting my money back.