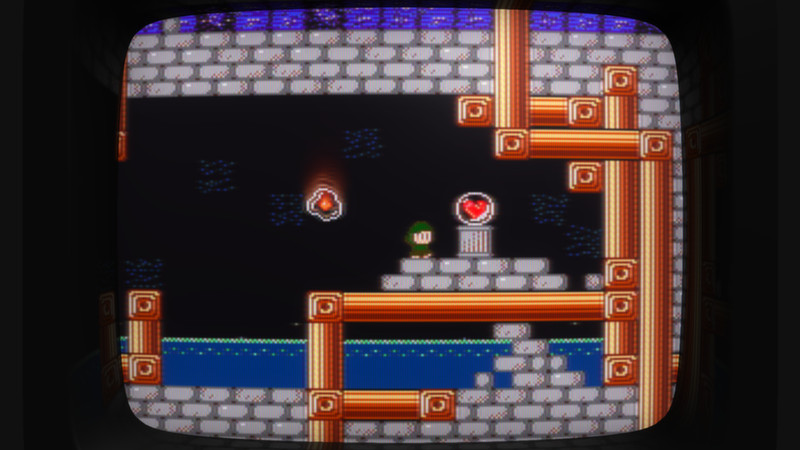 Throw on your nostalgia goggles and travel back in time with Super Win the Game, a retro-core explosion of exploration and platforming action!! 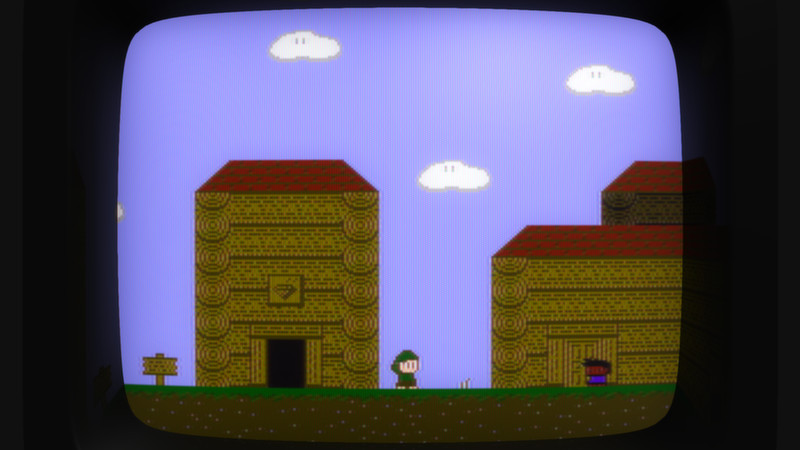 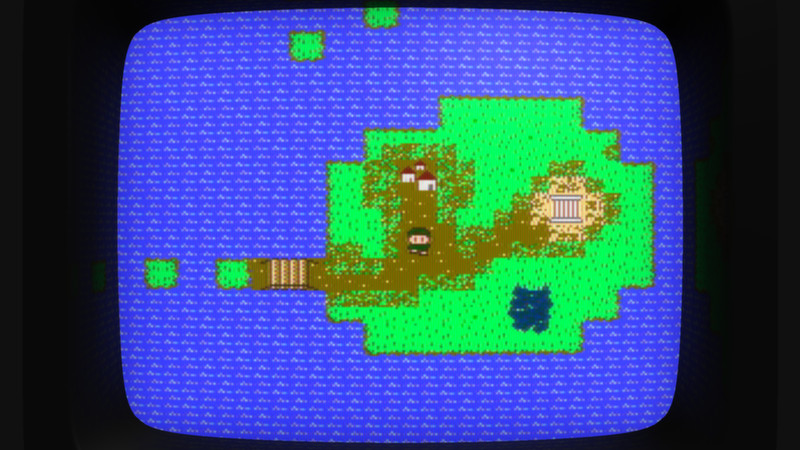 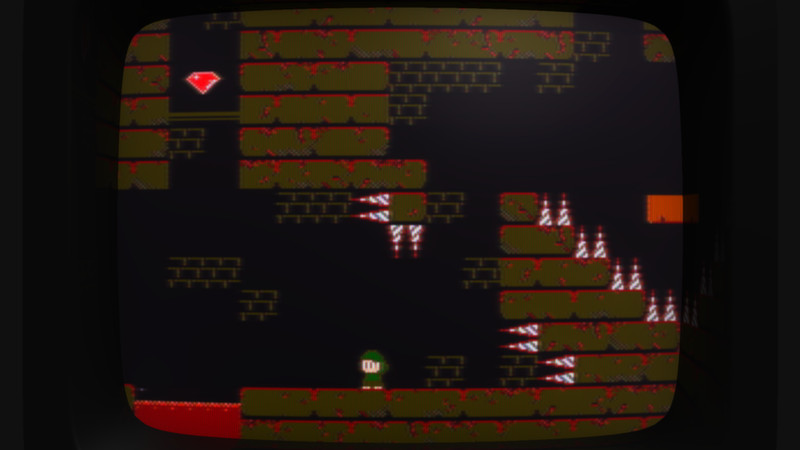 
Not only is this game a hidden gem, but you also have to collect 128 of them in the game. And you can be sure, this will be no easy task. But the game keeps you going on by featuring nicely implemented Metroidvania style exploration based gameplay all wrapped up in a neat Zelda II coating just without the combat.

What's great in the graphics department is the extensive use of options to tweak the display, from scanlines, to pixel format or even adding a nice TV like border around the game's display. And this is only scratching on the surface of this feature. Believe me when I say that every retro gamer will love these possibilities the game offers in this department.

For me this game is a nothinker at recommending it, but you should maybe wait for a sale or discount as the standard pricing is a bit high in my oppinion. Other than that there is nothing to complain about if you like this style of game and the genre in general.. Not only is this game a hidden gem, but you also have to collect 128 of them in the game. And you can be sure, this will be no easy task. But the game keeps you going on by featuring nicely implemented Metroidvania style exploration based gameplay all wrapped up in a neat Zelda II coating just without the combat.

What's great in the graphics department is the extensive use of options to tweak the display, from scanlines, to pixel format or even adding a nice TV like border around the game's display. And this is only scratching on the surface of this feature. Believe me when I say that every retro gamer will love these possibilities the game offers in this department.

For me this game is a nothinker at recommending it, but you should maybe wait for a sale or discount as the standard pricing is a bit high in my oppinion. Other than that there is nothing to complain about if you like this style of game and the genre in general.


Romance fixes and a new game announcement:
Hello everyone,
A few months ago Quint and Senah became official marriage candidates, and since then players have discovered a small handful bugs of associated with those romance paths. Sorry for the trouble! The following issues have been fixed in the latest patch:


I'm also happy to announce that I have a new project in the works! 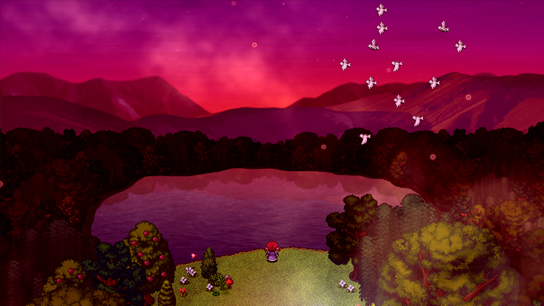 A Story Beside is a fantasy adventure game experienced through the eyes of an ordinary girl. It shares a lot in common with World's Dawn — the quiet rural community, fairytale setting and story, and charming cast of characters — and is planned for release in early 2018. I'm so excited to share this game with the Steam community in particular, because it was your feedback on World's Dawn that helped it take shape. Every single comment and review has been taken to heart and channeled into the development of this new project.

Thank you truly for your continued support! 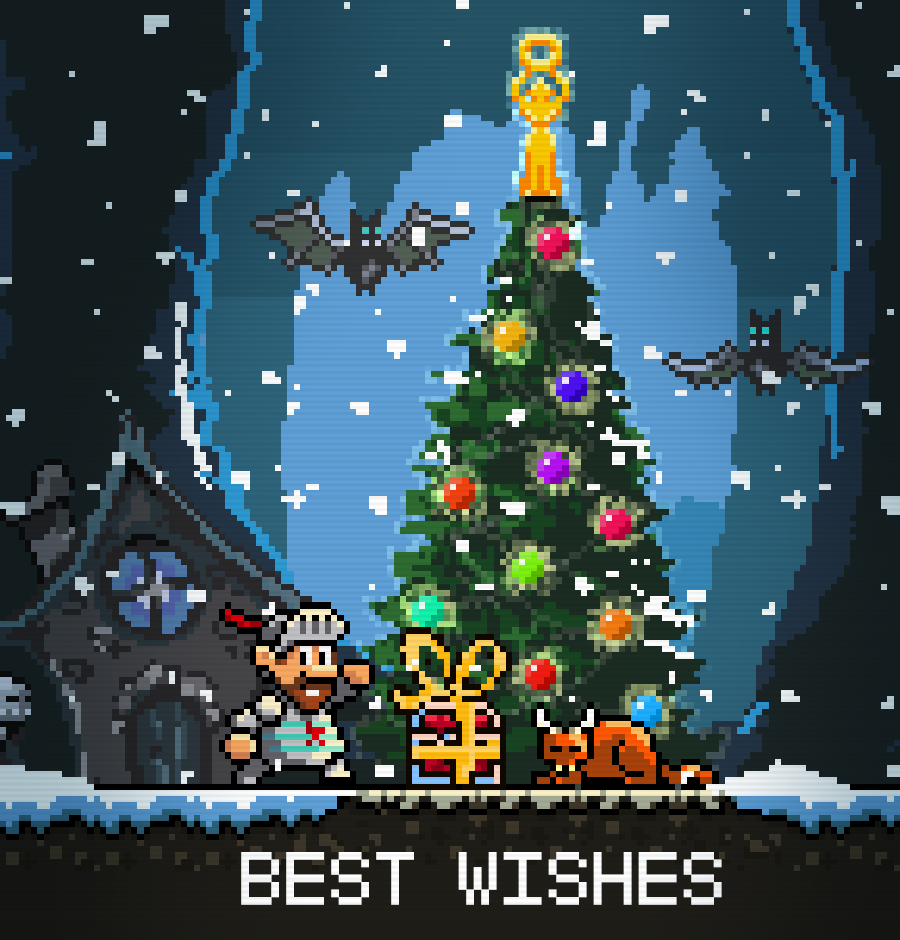 . New trailer for A Story Beside:
Hey everyone,
It's been a while! I've been hard at work on my next game, A Story Beside, and wanted to share this new gameplay trailer. I truly believe fans of World's Dawn will appreciate the charming small-town setting and dynamic cast of characters. 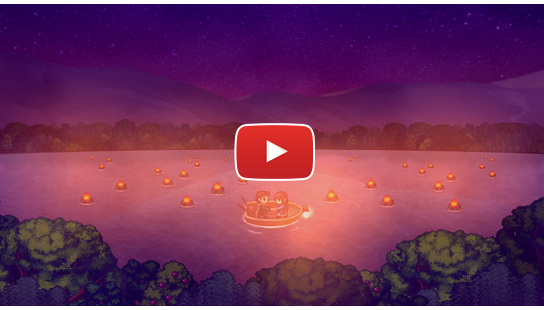 https://youtu.be/BKyeFtsqTkk
A Story Beside is more of a character-driven adventure game and less of a traditional farming sim. This is in direct response to all the reviews and feedback World's Dawn has received since release — most of which point to the writing and characters and social interactions as the game's most positive aspects. Get ready for a lot more of that in A Story Beside!

At the moment, the new game is planned for release in late 2018. I don't have an official date yet, so be sure to watch the Wayward Prophet Facebook[facebook.com], Twitter, or YouTube for updates. 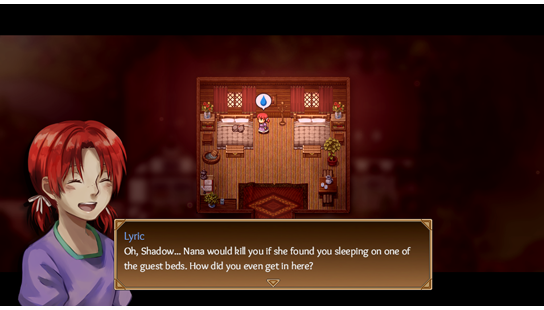 Finally, World's Dawn is on sale for 70% OFF this week!
Please share with any friends or family who might be interested. Every sale helps and every last bit of income will go directly into development of the next project.

Thank you as always for your continued support and all the lovely comments and messages. Working as a solo indie developer is often a struggle in a number of ways, but the enthusiasm from this small but loyal community inspires and motivates me on a daily basis.

Seriously, y'all are the best.

Until next time,
David Grund
http://waywardprophet.com. Stop farting, it's time to save the world!:

You've saved the world many times before, no doubt.
This is your ultimate chance to really save the world, again!

See you on the other side...

https://store.steampowered.com/app/861150/Plutonium_Pirates/?beta=0. No farts wasted - the first update.:
So, thanks to all for your very valuable feedback, here is the first update for Sigi.

Controls
You asked for:
- support for many more controllers, DONE
- swap A and B buttons for jump & fire, DONE
- vibration support for Xbox controllers, DONE
- WASD keyboard support, besides the existing controls, DONE
- J to jump and K to fire, besides the existing controls, DONE
- Mouse buttons to jump and fire, was done, but removed again, as it messed up how the menus worked with the mouse. Will try to get it working for the next update, as it did play very well like that!

Achievements:
Now, once the game is completed, achievements fire off after every level when you decide to go back to complete your score, instead of after the final boss.

Final boss:
It seems many players did not understand the hints on how to defeat the final boss. These have now been changed to give clear directions.

Screen / layout:
You also asked to be able to play in a window instead of full screen. This is in progress for the next update.

Plus a couple of other tweaks and boring corrections not worth mentioning.


Thanks again for all your amazing feedback and support!
. Sequel confirmed ! Who gives a fart?: 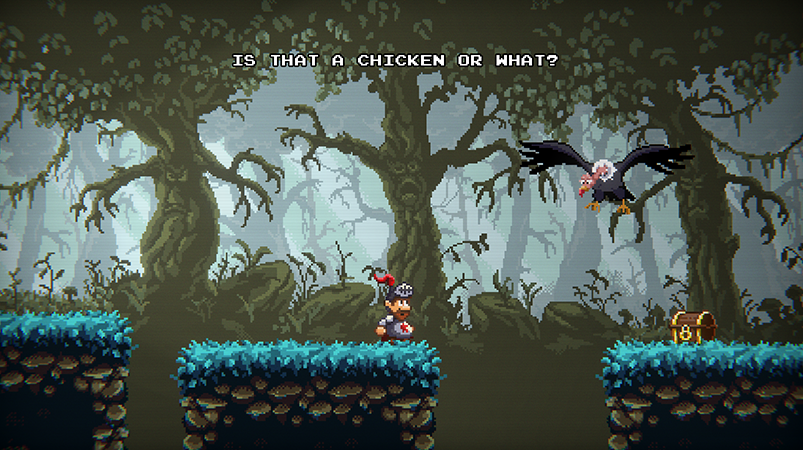 Could that bird help me get to the other side?. Time is of the essence...:
Without practice, this is what will greet you. Often. 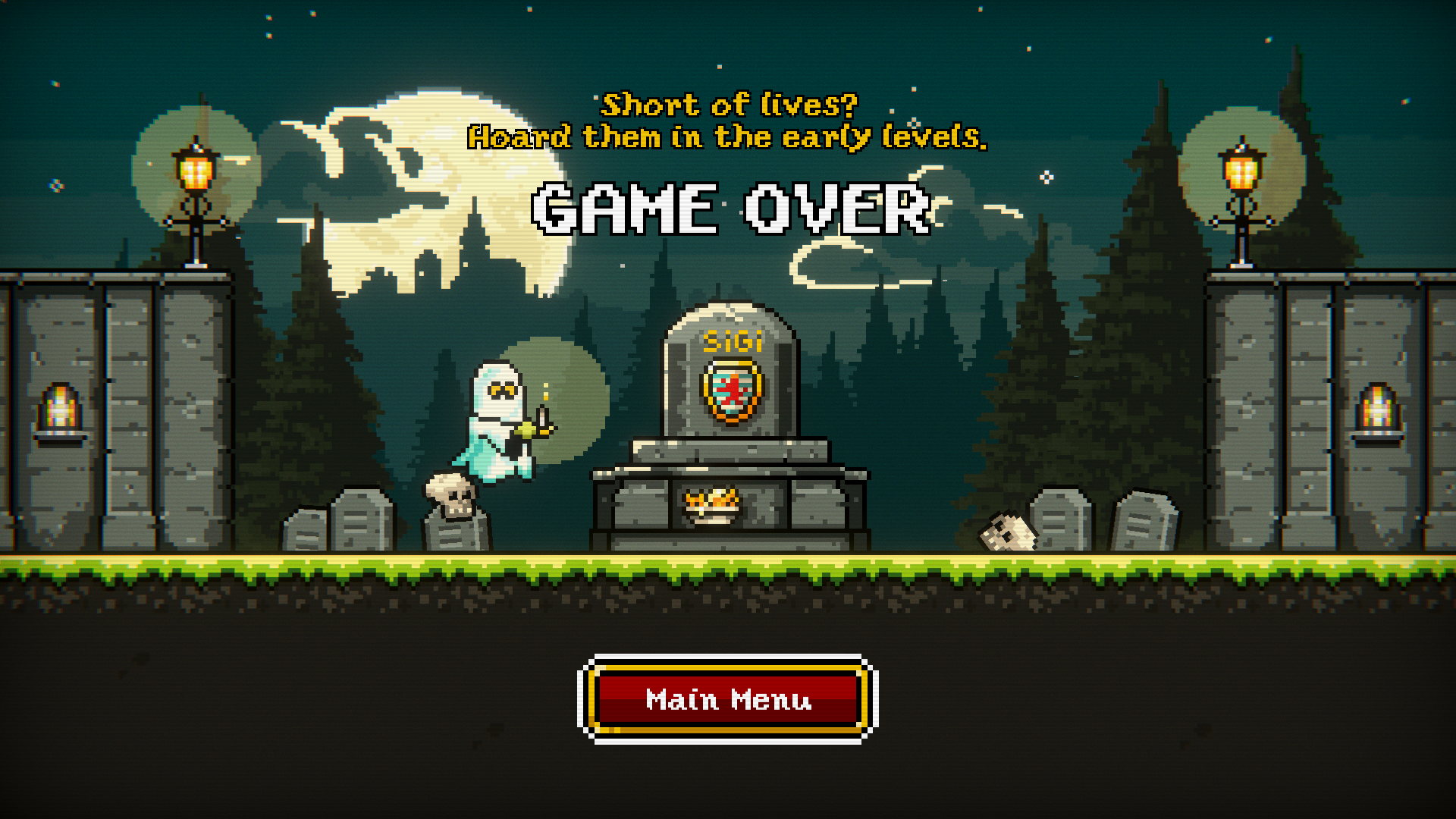 . Looking back and moving forward:
Hey everyone!
I wanted to drop by and share my thoughts on the current state of World's Dawn, as well as how its reception here on Steam is helping shape what's coming next. Although I'm not planning any more content updates (for now anyway), the spirit of World's Dawn is alive and well in my next project.

Take a look at this retrospective video I put together to show how the feedback and critique World's Dawn received has inspired the development of A Story Beside. 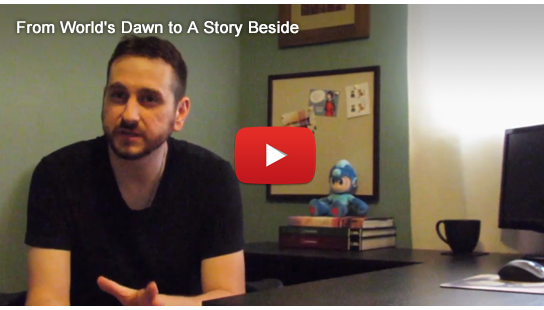 I've taken a lot of lessons from World's Dawn, its lengthy development process and managing regular updates and patches post-launch. As a result, I'm more confident in my strengths as a designer and more aware my weaknesses and limitations (engines, resources, time, etc.). Being able to communicate with players and engage in the Steam community has given me a ton of valuable insight and experience moving forward.

A very heartfelt thank you goes out to everyone who took the time to play World's Dawn and share your thoughts on it. I'd also like to apologize to those who expected more in the way of content updates or fixes. While I'd love to add children, deeper character customization, and tons of unique events beyond the main story, it's just not feasible as a one-person development team with limited time and a meager budget.

I'm so excited for everyone who enjoyed World's Dawn to be able to play A Story Beside — and hopefully love it for a lot of the same reasons! Please look forward to the game's release in 2018 (and more updates to come in the meantime). 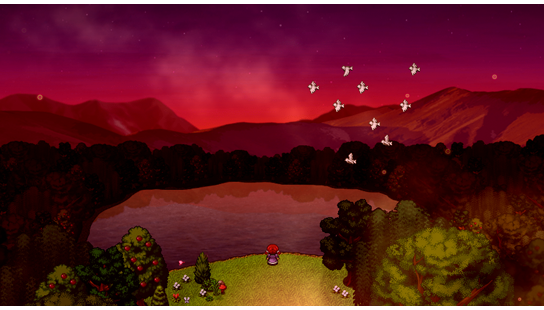 Words aren't enough, but thank you once again for your continued energy and enthusiasm. The support from this small but incredibly positive community has truly kept me going and inspires me to make the next game that much better.

One last note... World's Dawn is on sale this week for 50% off! If you have any friends who have wishlisted or simply might be interested, now would be a great to time to nudge them in the direction of the Steam page or give it a share on social media.

All my very best,
David Grund
http://waywardprophet.com. Summer Sale and future updates:
Hello all!
I wanted to let everyone know that World's Dawn will be 40% OFF until the end of the Summer Sale! I am very happy to be participating in my first big Steam sale, and hope the discount will motivate new players to jump in about 5 months after release.

World's Dawn is a passion project, born from a love of the Harvest Moon series and developed entirely by yours truly in my spare time. The game was received very warmly and I'm extremely grateful to the Steam community for embracing my little farming sim. It has done well, but unfortunately not quite well enough to fully support its own continued development... so it's still a project I'm only able to work on during my spare hours. I know that's not much of an excuse for the lack of updates these past few months, but I want everyone to know I certainly haven't given up on making World's Dawn better. I simply haven't had much time to do so!

That said, I wanted to give you a sneak peak of the next big update, which will include the much-requested addition of new marriage candidates Quint and Senah! 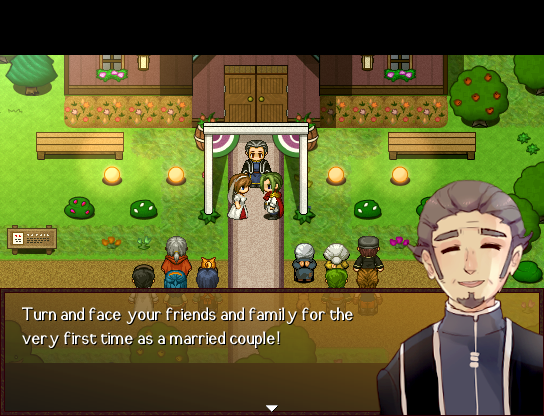 I don't have a release date for this content update quite yet, but I promise you won't have to wait too long. There will be other additions to the game included, though I'm not quite ready to announce all of them yet.

Thank you so much for playing World's Dawn and for your continued support of this project! I would really appreciate any and all help you're able to give spreading the word during the Summer Sale and beyond =)

All the best,
David Grund
Wayward Prophet[waywardprophet.com]. Lost in Lululand:
A couple of days ago someone asked about the visual differences between Sigi and the sequel. This should help clarify things. 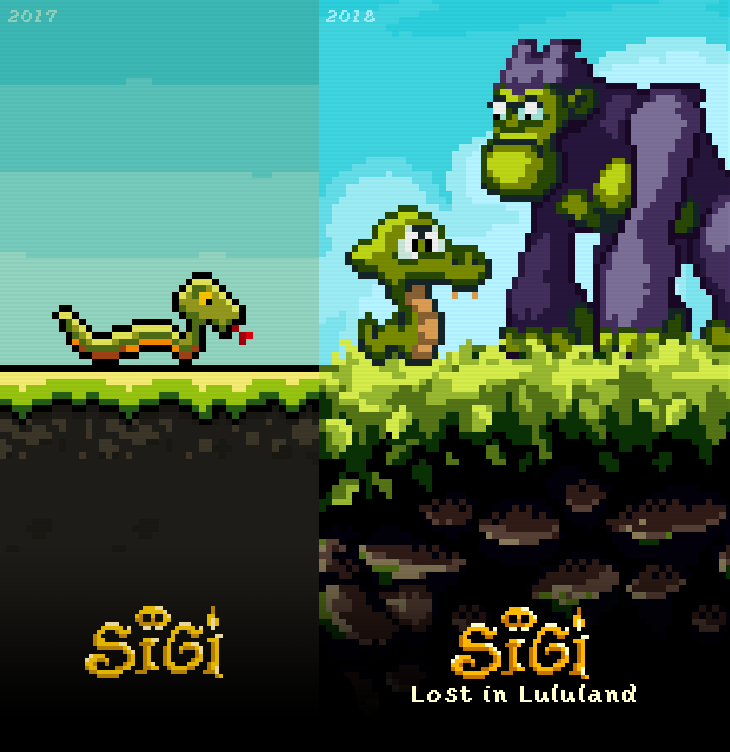