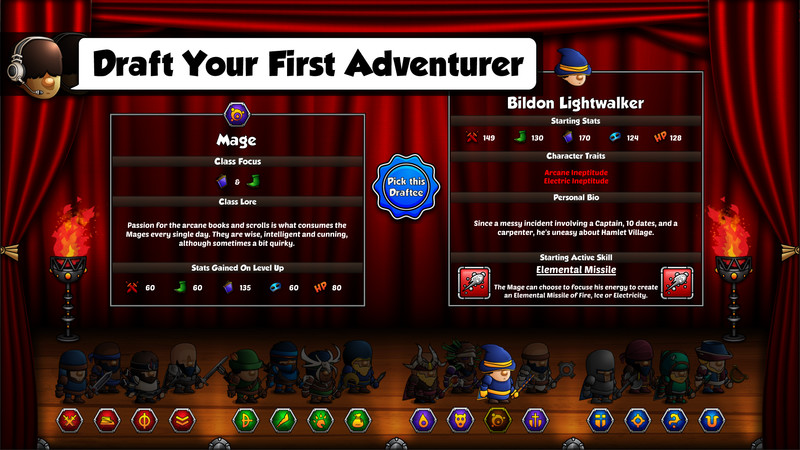 You are the General Manager and CEO of your very own Adventuring Agency, the riskiest yet most lucrative business in the Realm of Astraeus. Recruit adventurers, negotiate their contracts, send them out on dangerous quests and reap the rewards should they make it out alive. Expand your Agency, manage your growing resources and best your competitors to become the Epic Manager!

Epic Manager is a fresh new take on the Tycoon RPG genre, heavily inspired by classics we all know and love! The game presents a unique mix of roster management and character progression found in titles like Football Manager or Final Fantasy Tactics, narrative choices & consequences in the beloved tradition of gamebooks series Choose Your Own Adventure, the epic scope of a D&D campaign or a Lord of the Rings novel and the humoristic tone of The Princess Bride, all in one awesome package!

Your goal is to gain the title of Epic Manager by becoming the most famous Adventuring Agency in the vast Realm of Astraeus.

Send agents on the field to prospect new job opportunities, scout the dangers ahead, recruit new adventurers, negotiate their contracts, organize them in parties and complete dangerous quests to earn more fame than your rivals and climb the rankings of the League Ladder!

Along with managing your contracts and jobs, you’ll also hire support staff, trade with the local merchants, upgrade your agency’s HQ, research new abilities and upgrades, expand your reach across Astraeus and interact with competitors by using intrigue and diplomatic actions.

Adventurers are the backbone of your Agency. To find them, you’ll first need to organize recruitment campaigns across the Realm, then negotiate contract terms with those who present suitable talents, traits and growth potential!

Add recruits to your ever-growing roster of unique characters and manage their progression as they gain experience and level-up. Experiment with the endless combinations and powerful synergies offered by our Multi Class system and build parties suited for every situation.

Discover an emergent narrative shaped by YOUR actions. As your forces move on the map, they will come across an ever-growing bank of Random Encounters, narrative mini-scenarios giving you many choices on how to proceed. In some cases, having a specific class in your party will even reveal special hints and hidden options!

In each campaign, actions you make will influence the ruthless political web of Astraeus and modify your reputation with each of the game’s 12 factions. Encounters and quests you decide to complete will lead to job opportunities that might not have available to you otherwise. As your agency grows, you’ll also use the Tech Tree and spend research points to unlock new abilities and specializations that fit your own play-style.

As the commander-in-chief, you’ll get to take command of your adventurers as they meet increasingly dangerous foes on the battlefield. The parties you create will allow for powerful class and character synergies to stack the odds in your favor, as you make the best use of the hundreds of items, skills and spells at your disposal.

Scout battles in advance to gather intelligence about the enemy forces and better exploit the weaknesses of dozens of enemy types inspired by bestiary classics : Goblins, Orcs, Ratmen, Gnolls, Skeletons, Zombies, Giants and many more!

Some adventurers will grow from rookies to heroes, legends even, while others will quickly meet an untimely end. Such are the dangers of being an adventurer!

Epic Manager features many procedurally generated content like randomized adventurers, equipment items and quest rewards to make each play-through different from the next! We want Astraeus to feel like a living world that reacts to you, just as you react to it. World Events, Random Encounters and RNG-based dice rolls will determine the consequences of some of your choices, changing the priorities of your Agency’s day-to-day operations.

Scattered in Astraeus are very familiar and powerful characters. Some, like the Shovel Knight and Rogue Legacy Knight might be easy to find, others not so much - look for them as your forces venture across the Realm!

ManaVoid Entertainment is a small but dedicated four-man Indie Studio based in Montreal, Canada.
http://www.manavoid.com

All of Epic Manager's SFXs and Original Sound Tracks were created by our talented collaborators and friends over at GeekSound Factory.
http://www.geeksoundfactory.com 7aa9394dea 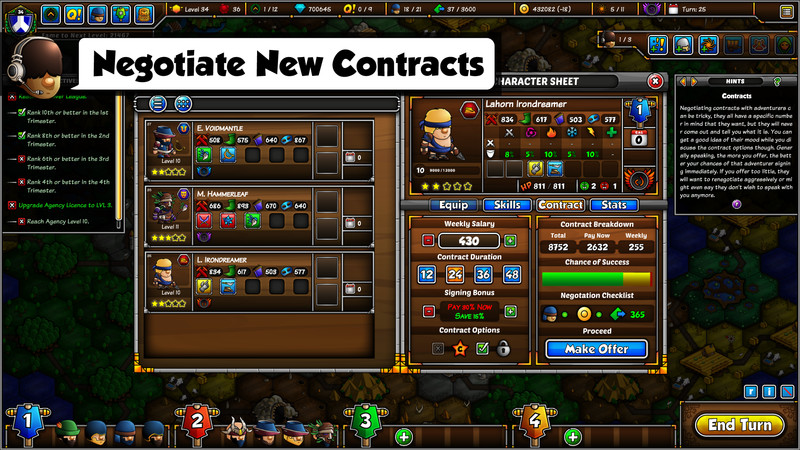 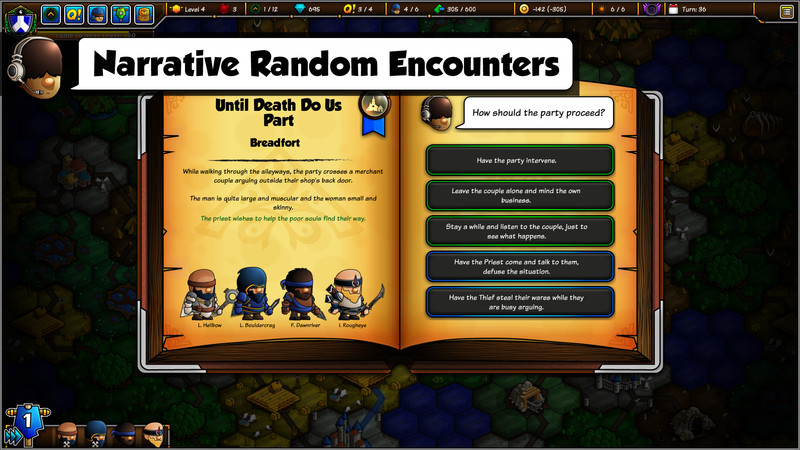 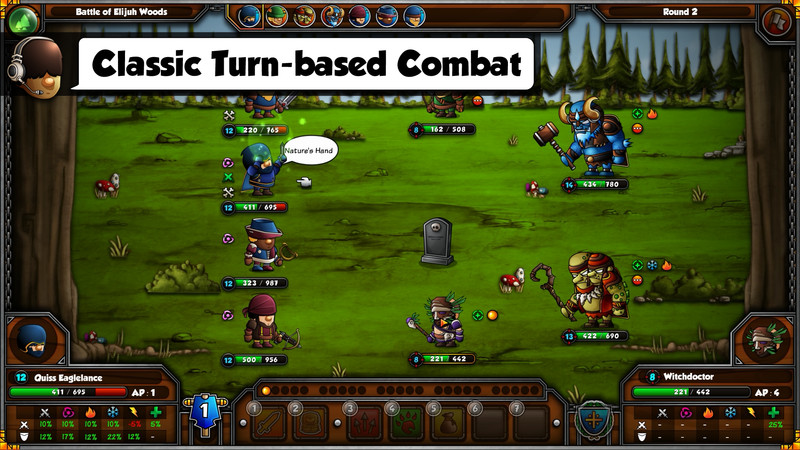 This is a good game, there are many elements to like so I will just leave what I think can be further improved.

1.Battle animation, I understand this game is about management, but still, I believe the animations can be improved to show the different features of each class.

2. Signing Adventurers, I would like to see more factors that will influence their decision making, such as wounded frequency, relationship with teammates, contribute to the party, etc.

3. Euipment, they give you random stats, some might not suit the need of the class, and since it costs a lot to upgrade the agency licence, players just don't have so much gold to buy equipments from the market. So either create numerous sets for equipment, or lower the upgrade cost.

4.Action bar (or whatever it is called), players need to see the orders in at least two turns so they can make a better plan, especially in most cases you set the tone of the battle in the first two turns.

5.Stats, adding one or two more stats would be great, and despite of 90% of attacks from foes are physical, there are three types of magical resistences, which are pretty useless stats in charms or kits.

6.Tutorial turns, not much to say, you can't skip them.

And some features I would like to see in a 2nd version (if you are planning to develop it):

1. Other Agencies, for now they just randomly steal things from the player at the beginning of each turn, how about letting them manage their agency just like player's? you can interact with them on the map or in other aspects(annual tournament for example), and that will open up so many things in the job market, think about it!

2. Battle skill, basically all about damage, use your imagination, or even get some ideas from other turn-base games like pokemon, also, it will be even better if there are more cooperations between teammates.

I hope my feed back will help, good job and keep it up!. It's a turn-based strategy game where you run an organization of fantasy characters who take on quests. They're on a team in a league, the more jobs you do the better you do in your league (and possibly rank up to the next of I think 5 leagues). Or get demoted if you don't do enough.

There's a bunch of different classes but not much customization. The customization really only comes from multiclassing, which allows for I think 5 classes on any one character. So that kind of makes up for the lack of individual class customization. It's not quite as in-depth as I'd have preferred; I would've given up a lot of other parts of the game for more ways to customize your heroes and bigger skill trees.

The biggest problem I have with it are some of the random events, which often seem either too obvious or too random.

And the fact that certain classes and builds seem strictly better than others. Why would anyone ever not have a Witchdoctor on their team? I don't think it's subjective that the one class with a solid early game AoE heal is going to be one of the best, if not the best.

The talent choices seem obvious, there's AP reduction passives but there's also some massive buffs to active skills which are well worth paying the extra AP for. I think this should be tweaked in the future, but I think the numbers are a bit too small to make balance work without changing a lot of what's in place. 2 AP reduction is great, eventually you'd get to do skills for free. But 1 AP reduction isn't really that much.

It's also got a campy as hell sense of humor, but it's kinda cute in the way that Shakespeare used to like watching ♥♥♥♥♥♥ plays. That's not an insult btw, I really did like it in that way. There's also a managerial aspect where you trade heroes with the AI, sign new players, scout for new job opportunities, etc. I haven't delved too much into the trading because that comes later than where I got to so far. But it's pretty good so far.. Game has frustrating mechanics, you are penalized for doing well, and its unfulfilled in its direction. It might be feature complete, but whenever I played it I felt like I had a thousand ideas to improve upon it.

Not sure I'd recommend this unless you get it at a discount. Idea is good, everything seems promising..., but its just not right there yet.. This game has froze 4 times now but that is not my major issue. This game forces you to use trash adventures, keeping a good A team on payroll will bankrupt you unless you get lucky and get the right quests at the right locations, This game is heavy HEAVY RNG. A bit of bad luck can totaly destroy your game. An example: I just had some bad luck in a fairly normal encounter and two of my best guys get killed I am running low on gold as I am having no luck getting quests nearby and so I spend a good chunk of my gold on an expensive marketing Campain to get more DPS. Sadly I get nothing but support with skills that will not help me, so I suck it up and sell a bunh of stuff in a last chance to get some heros that will be usefull and and this time I get some usefull heros however when I try to get them under contract for something affordable but still reasonable all 4 of my picks get angry and dont want to sign! Now I have no money and nothing to show for it! Then the game freezes again.
I have made it to gold rank 5 times now but then I fall apart as I cant compeate with the other agencies not even close! Just keeping a team of level 10s on payroll is about 1000 gold a turn IF you bargen them to take at least 30% less pay, Most quests pay 2-5k for level 3-4 so if you have to move 3 turns to get to a quest you can possably spend more getting there then the quest pays out!
I liked the game a lot at first but the reward gold payouts are just too stingy, and RNG is just mercyless makeing the later game a frustrating experionce.. Awesome game! Great dev team! 10/10. This game is not for me. It is very annoying as I play further into the game. Gameplay is low key and repetative. I will definitely give it up.. SO MUCH POTENTAL!!!

Pros:
Varied Classes
Turn-based done right
Engaging Combat
Cons:
Dont get used to a single party member staying in party due to either death or far excceding your abiliy to pay for
Exponent level jumps in dificulty between seasons beyond what your guild is ready for.
no sandbox mode just the same run to the end of 3 seasons and see if you survive

will try it again later but for now i cant say i would buy it for full price
. I think this would be a better game to play on your phone. Maybe it gets better with more development, if so wait for it. Cool concept, was really excited but so far it's pretty boring.. This game is awesome! I hope we see a multiplayer version soon enough! Can't wait to compete with other players :)