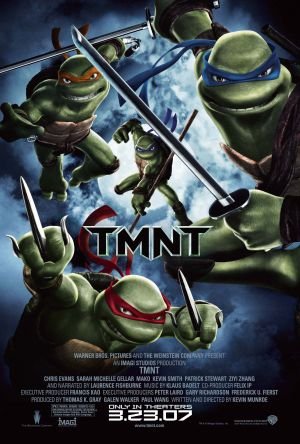 The story was sort of a mixed bag. I liked the struggle between the Turtles and how Leonardo is trying his hardest to get the team back together with Raphael trying to pull away. Everything else, however, could've been a little better. There doesn't really seem to be any level of suspense here, save for a fight between two main characters (which looks phenomenal, I might add). I also would've liked to have seen a bit more screen time for Donatello, who always seems to be pushed to the side. And there were some jokes here and there that might make you cringe, most of them involving Michelangelo. But this is still an enjoyable flick for everyone to watch, even if you're not a Turtle fan. It's worth seeing for the animation alone. TMNT is the fourth Teenage Mutant Ninja Turtles franchise and it was written and directed by Kevin Munore and the film features the voice talents Nolan North, James Arnold Taylor, Mikey Kelley, Mitchell Whitfield, Chris Evans, Sarah Michelle Gellar, Kevin Smith, Patrick Stewart, Zhang Ziyi and Laurence Fishburne (who provides narration).

This was also the last film that Mako Iwamatsu made before his death and was co-produced by the franchise's co-creator Peter Laird for Warner Bros. Pictures.

TMNT was the first TMNT film made with computer-generated imagery (CGI), created by Imagi Animation Studios, as well as the first feature film in the franchise in 14 years.

TMNT co-created Peter Laird stated it takes places in it's own universe separate from the previous films, which was supported by it's depiction in Turtles Forever.

The film sees the four Turtles: Raphael, Leonardo, Donatello and Michaelangelo grow apart after their final defeat of the Shredder, when strange things are happening in New York City as ancient creatures threatens the world and the Turtles must reunite to save it.

The CGI is really amazing and the way New York City and the way that the characters look is really fantastic and it is just fantastically well-done and spectacular and the direction could not have been done any better in this flick and on a positive note, I like the way the Turtles are done in this film, because they made them look more realistic.

The acting is amazing and I will give credit to when it's due.

Nolan North plays Raphael / Nightwatcher and he does justice.

The late Mako Iwamatsu plays Splinter and he does the voice incredibly and considering what he was dying of during production of this film, he could have done a lot worse.

Zhang Ziyi plays Karai and she is amazing in that role.

Patrick Stewart plays Max Winters / Yaotl and he does an amazing job and he is fantastic.

Chris Evans and Sarah Michelle Gellar plays the roles of Casey Jones and April O'Neill were amazing and fantastically and they did their very best in their roles.

Laurence Fishburne does a great job telling us this stand-alone story and he does an amazing job as the narrator and he did some serious storytelling and I did love his performance as Morpheus in the Matrix Trilogy, but I'll save that for another review.

The music composed by Klaus Badelt was just spectacular and he could not have done a lot of worse because I loved his musical score for the 2004 critically panned, Catwoman, directed by Pitof and starring Halle Berry as Patience Phillips / Catwoman.

The action sequences are just overly fantastic and spectacular and they could have messed up on certain things but they did not and I am glad they did not make any mistakes on this film, like they made some mistakes on "Teenage Mutant Ninja Turtles III: Turtles in Time".

Overall, I love TMNT and I have seen this film twice and it is just spectacular now as it was when first released in 2007, but I was sad that they decided to reboot the franchise instead doing a sequel to the 2007 animated film first.

But, I have seen the 2014 reboot and I have not seen the next Teenage Mutant Ninja Turtles film, which I am about to review next, but I have seen a review of this film, the original trilogy released from 1990 to 1993 and the next one I am about to review, which the name of it is Turtles Forever or Teenage Mutant Ninja Turtles: Turtles Forever on Superhero Rewind and Movie Night with Johnathan Paula on YouTube.

But this movie, I am giving TMNT a 10 out 10. A tad too conservative and calculated. CGI delivers best on moody sets and a noirish atmosphere achieved by lighting, backgrounds and visual effects. But the characters look like plastic dolls, and the story is recycled sci-fi.
"Michaelangelo",