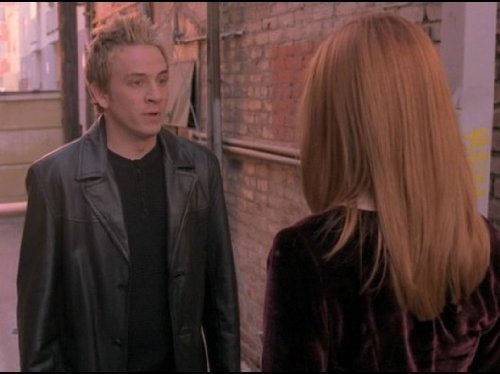 Buffy hopes to learn more about what she's up against with the First by taking Spike prisoner; Xander and Anya interrogate Andrew.
Spike is held captive in the Summers home while the Scoobies ponder their options in the aftermath of his murder spree. Willow finds Andrew buying blood and decides to take him prisoner also. While they try to decide what to do next, the gang are interrupted by the mysterious hooded figures called "Bringers"... the minions of the First Evil.
This is actually a very important episode to the story arc this season. It sets up Andrew's turn to the good side, it establishes Buffy's faith in Spike, it wipes out the Watcher's Council and it's where the Scoobies realize that the First is after them. If you're going to watch season seven, you need to see "Don't Ever Leave Me." A lot happens and it's one of the last chances to enjoy the show before the Potentials arrive.

This episode revolves around the aftermath of Spike's murder spree. He continues to be baffled by what happened and scared that he might hurt someone else. Buffy ties him up in the bedroom and tries to help him recover from the effects of drinking human blood for weeks. She sends Willow out to get some animal blood from the butcher to help Spike through withdrawal. Meanwhile, Andrew is trying to deal with the "ghosts" of Warren and Jonathan. They tell him that he needs to open the Hellmouth seal and he'll need more blood to do it. Andrew refuses to kill anyone else, and after a failed attempt at pig slaughtering, he heads for the butcher, too. Andrew and Willow meet up and are stunned to see each other. She takes him hostage and drags him back to the Summers' house. Principal Wood finds Jonathan's body in the school basement and buries him in the desert.

Xander and Anya question Andrew, convinced that he knows more than he's letting on. After beating him up for awhile and threatening his cool new leather coat, he begins telling them about the plans to open the seal. In the next room Buffy is talking with Spike. She takes a quick break to check on Andrew and when she comes back, Spike is acting very differently. He's been singing and talking to himself, suddenly he bursts out of the chair, breaking the ropes and shoves Buffy aside. He drags Andrew right through the wall and bites him. Buffy has to pull Spike off Andrew. She knocks Spike out and chains him to the basement wall. Meanwhile, Buffy searches for Giles. She calls the Watchers' Council who are preparing for war. They don't tell her anything, but they plan on a trip to Sunnydale to help her fight. Then, their headquarters blows up, killing all Watchers.

Xander has come up with a theory on Spike's behavior. He think's that Spike's been brainwashed and that the song Buffy keeps hearing him sing is really a trigger. Buffy goes to talk to Spike, telling him that they think he's under some evil mind-control. Spike tells Buffy to kill him. He claims that she's never seen the "real" him and if her gets loose he could kill all of them. Buffy refuses to stake him. She tells Spike that she knows how much he's changed and that she believes in his goodness. Spike is touched. Then the Bringers attack. They work for the First and after trying to kill Andrew and the Scoobies, they kidnap Spike. Buffy realizes that the First is behind this. And back at the Hellmouth, the Bringer's are using Spike's blood to open the Hellmouth and release an UberVamp.

There are some great parts to this episode. I love Xander, Anya and Andrew's scenes together. Anya and Xander use a "good cop/bad cop" routine that's just hilarious. I especially like the hurt look on Xander's face when Anya gets too involved in the plan and smacks him. And Buffy and Spike's scene in the basement is really beautiful. She tells him that he can be a better man if he just believes in himself, the way that she believes in him. I think that it's a turning point in their relationship. Willow cornering Andrew in the Butcher's shop is also great. "I am Willow. I am Death... Okay?" I'm so glad she brings Andrew home because he adds some much needed comic relief to the show.

On the down side, I still don't get the First's plan. It wants to get rid of Andrew and Spike, I guess. So they won't tell Buffy anything or help her. But, sending a few Bringers to raid the Summers' house seems sort of dumb. Why not attack full force and kill all the Scoobies while they sleep? Or bomb the house like it did with the Watchers' Council building? Also, I feel so sorry for Jonathan. He was a nice kid underneath all his "supervilliany" tough guy talk. He deserved better than a shallow grave and no one to mourn him.

My favorite part of the episode: Andrew. From walking around looking cool in his Spike-like leather coat (and he REALLY has Spike's prowling walk down), to his attempted pig slaughtering (I had to pause the DVD I was laughing so hard the first time I heard him bellow, "That'll do pig!"), to his apology to "Jonathan," ("I'm not good at stabbing things"), he just steals the whole episode. Funny reference to the infamous "permanent record", while principal Robin Wood delivers an ultimatum to 2 kids in his office (which they reject). As soon as I heard the words "permanent record" leave his lips I started to balk. But to his credit, he then proceeded to expose the myth about the permanent record once and for all: NOBODY GIVES A HOOT ABOUT IT! LOL. As he says (after they reject his ultimatum to repaint the walls they defaced, or have the incident go on their permanent record): "OK...I was bluffing...I hadn't really thought that one through. Listen...this whole permanent record thing is such a myth anyway. Colleges never ask for anything past your SAT scores. And it's not like employers are gonna be calling up to check to see how many days you missed in high school." Finally -- the permanent record myth DEBUNKED! Now that's progress!!

The butcher, to Andrew (who's wearing a long black leather coat) after he requests toothpaste along with the rest of his order: "This is a butcher shop, NEO. We don't sell toothpaste". Very funny!!

Funnier than two (former) nerds, Willow and Andrew, interfacing angrily in the alley outside the butcher shop? I don't know...maybe.

Anya, after Xander figures out that the song that keeps recurring is acting as a "trigger" to set Spike off: "The horse?"

Now...the not so funny stuff:

Later on, he goes further, after he implores Buffy to kill him:

"You wanna know what I've done to girls Dawn's age?" But she refuses to believe that he's dangerous.

"Have you ever really asked yourself why you can't do it -- off me? After everything I've done to you...to people around you. It's not love. We both know that"...(Buffy says it's because Spike has fought by her side and saved lives.) "Don't do that. Don't rationalize this into some noble act. Because we both know the truth of it. You like men who hurt you" (Buffy says "No".)..."You need the pain we cause you. You need the hate. You need it to do your job. To be The Slayer." And despite her immediate denial, all Buffy demonstrates is what she always demonstrates -- that she lacks even the most basic insight into herself and her own motivations. And while she might see more in Spike than he sees in himself, he clearly sees more about her than she sees about herself.

Definitely NOT funny stuff. This is the crux of the whole Spike-Buffy relationship -- something that seems to be both misunderstood and highly debated among the BtVS fan base.

Then enter...the Harbingers...scary dudes who are minions of The Firest (Evil), intent on pummeling the Scoobies and kidnapping/torturing Spike to use his blood to unlock the Hellmouth Seal and release the Uber-Vamp (quite an uncomfortable scene, BTW).

"Never Leave Me" also sheds light on the fact that Robin Wood might not be what he appears to be. After he finds Jonathan's body lying on the Hellmouth seal, he drives the body out to some deserted location and buries it.

And just when it looked as if The Watcher's Council would spring into action -- they all get blown up.

Worth noting: At the very end of the previous episode we see one of the Harbingers swinging a weapon at Giles' head, and then the episode ends. To my way of thinking, this episode should have started off where that one ended, to continue the tension/story arc, etc. Instead, it started with the Scoobies cleaning Buffy's house.