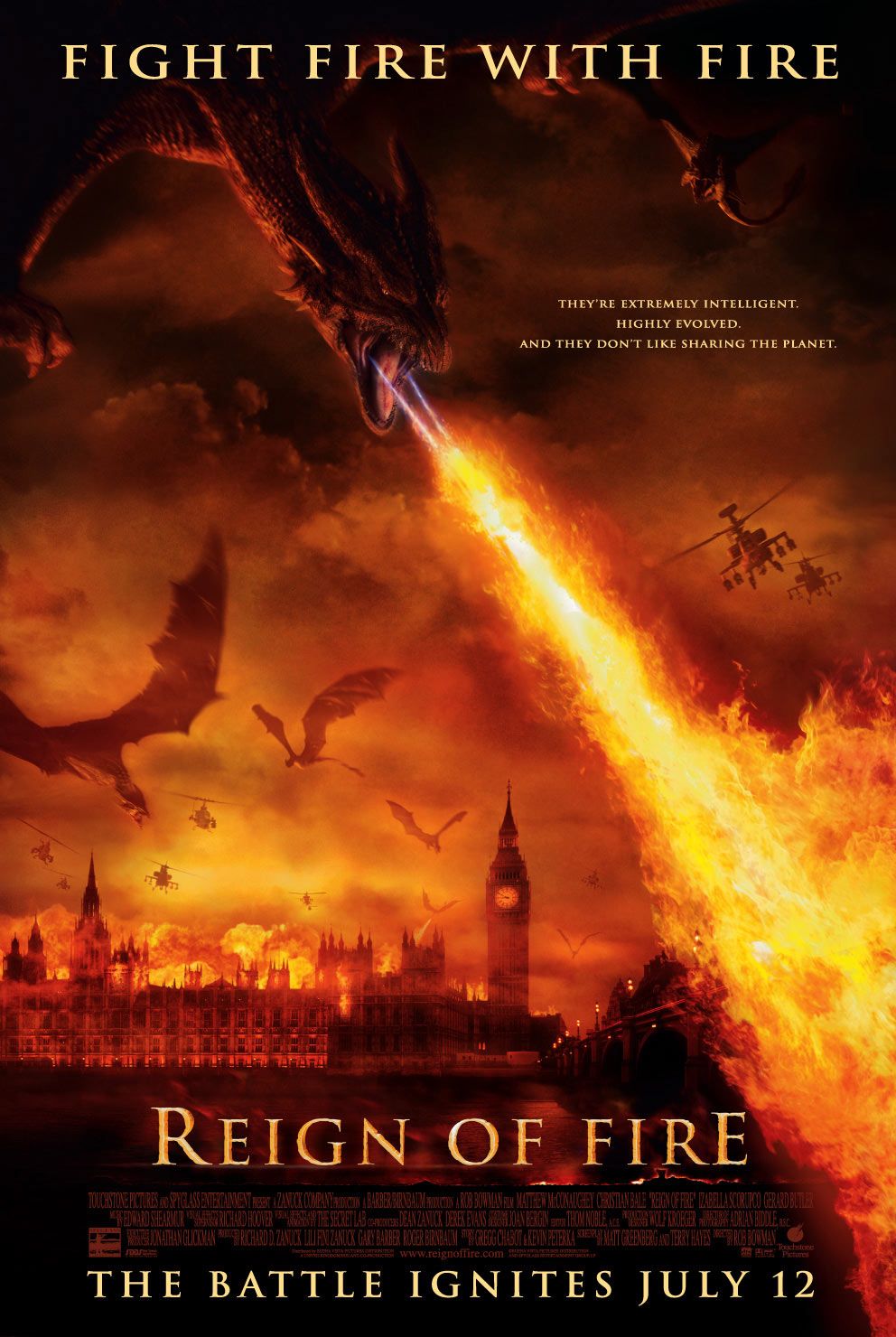 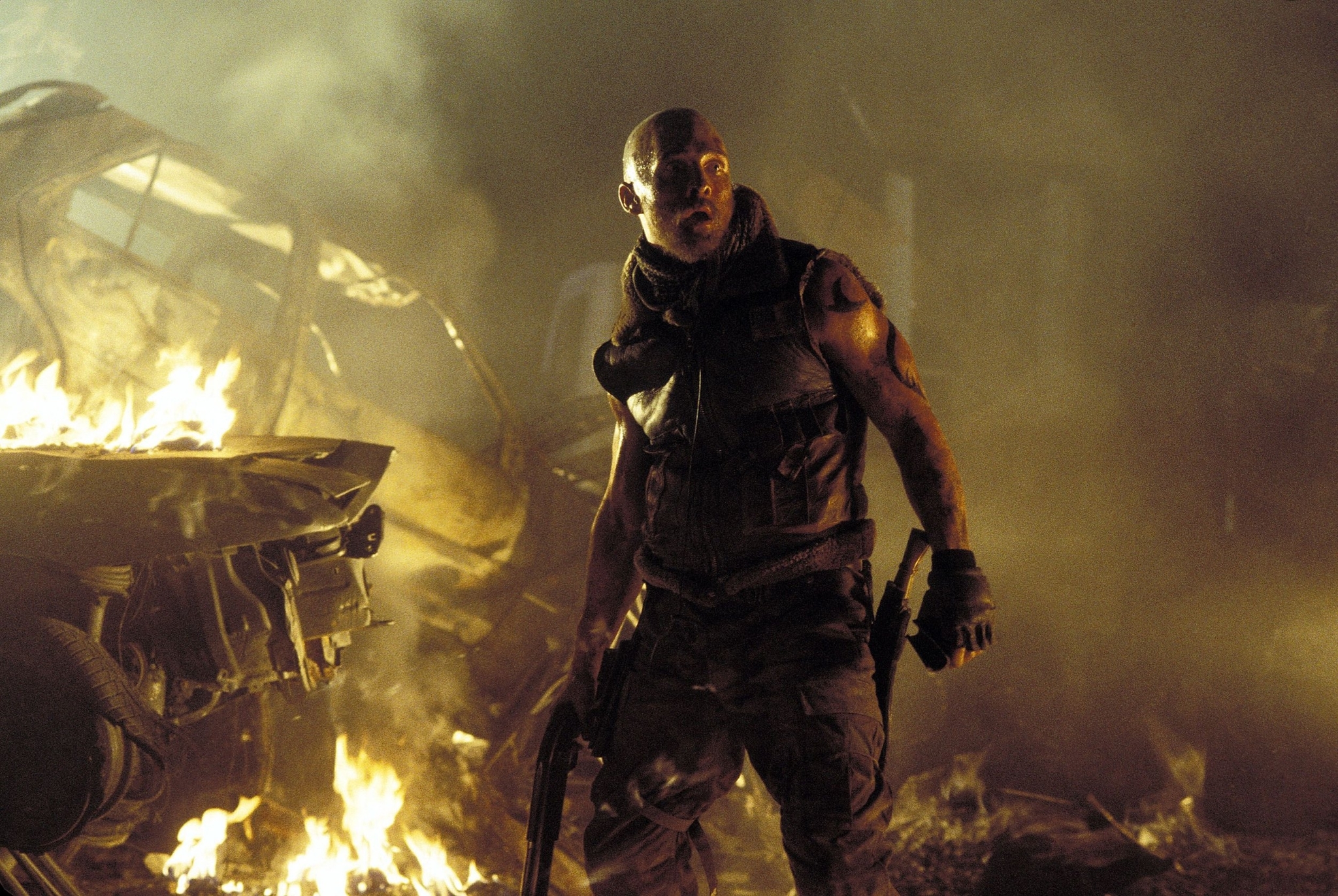 A 12 year old Quinn Abercromby accompanies his mother to work one day at a London tunneling project, his witnesses the accidental uncovering of a centuries old fire-breathing dragon beast and waking it from its sleep. After witnessing the beast kill his mother the film jumps twenty years later to a grown up Quinn who is the "fire chief" in a refugee camp. Unexpectedly an American militia leader shows up at the camp with a group of men that he calls "slayers." Van Zan and Quinn engage in a power struggle, before realizing it's the dragons they should be fighting instead.
It is twenty years in the future, and the planet has been devastated by vicious fire-breathing dragons. The last vestiges of humanity now struggle for survival at remote outposts. In a ruined castle in the English countryside, Quinn is desperately trying to hold together a band of frightened, restless survivors. As a boy, Quinn watched his mother die protecting him from one of the beasts, and is still haunted by the memory. One day, a group of American rogues shows up, led by a brash, tough-guy named Van Zan. He claims to have discovered a way to kill the dragons once and for all, and enlists Quinn's help. But doing so will force Quinn to confront his own frightening memories. This, and Quinn's responsibilities to those that are under his protection, results in a battle of wills between the two men. In the end, events cause them both to realize that they must work together to defeat the monsters--both without and within.
Pretty good Sci-Fi flick. In the vein of "Pitch Black" and the last 2 "Alien" movies. Should've been R rated. That could have given the director/actors more room to really explore the true terror these dragons were inflicting and could've been more graphic/dark. Not enough dragon sequences. Also, would've been much more plausible had it taken place in the 1930's or 1940's. That would help explain how we weren't able to deal the dragons. Also the much overused ending of a small band of humans with almost no weapons left being able to defeat the supreme enemy - in this case the Bull dragon - would work better in 1942 as opposed to 2020. I give it a 7 out of 10. Definitely worth watching.
I can't believe that I wasted my time watching this. It's a shame the dragons didn't get to the people who commissioned this before the cameras even started rolling.

Okay, the SFX were quite good but that isn't everything - you need a vaguely plausible story to bind it all together and this story had holes big enough to fly a fleet of helicopters through. The tone was set from the opening five minutes - I mean, whoever would allow a young boy down a mine and then into a void without taking the necessary Health and Safety precautions. Whilst acknowledging that this is a fantasy film, it is supposed to be set in the real world to start with - so some adherence to real life would have not gone amiss.

Take my advice and give this one a miss - even doing the laundry would be a better proposition!!! The beasts are employed to splendid metaphorical effect, which may be lost on viewers perceiving nothing but an action romp.
Van Zan was talking about a specific time of day during sunrise and sunset called "magic hour" or "golden hour", when the light from the sun is softer. Van Zan had figured out that the dragons have impaired vision during that time of the day. We see evidence of this during the final battle with the male dragon in London when we see things from it's perspective, its vision is distorted, somewhat blurred and unfocused, making it harder for the dragon to see clearly.